Podcasts have come a long way, and nowadays, it’s hard to find someone who doesn’t have a fave. Whether you have a long commute or you simply want to defeat boredom, here’s some recommended listening for you. 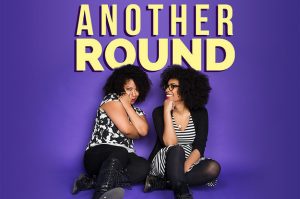 Hosted by Heben Nigatu and Tracy Clayton, ‘Another Round’ covers topics that include race, pop culture and everything in between. With the occasional guest host and rounds of booze, Heben and Tracy have become the “girlfriends in our head” for almost 20k listeners. In December of 2017, Heben and Tracy announced that they would be parting ways with Buzzfeed, the platform from which the podcast was produced, however, they also announced they were granted ownership of the podcast and would be returning to the virtual airwaves after a moment of self-care. While we wait for them to return, you can catch up on the podcast via Soundcloud.

‘2 Dope Queens’ is a podcast hosted by BFFs Phoebe Robinson and Jessica Williams.  The show is funny, entertaining, woke–basically it’s all that and a bag of chips.  Topics covered range from social commentary to relationships–however, the chemistry between these two besties and their authentic content is what has turned Phoebe and Jessica into podcast royalty! I mean, this show is so dope that they now have a live show!  Now, that’s next level podcasting.  Make sure you check them out at WNYC.org/2dopequeens.

Hosted by Kid Fury and Crissle, ‘The Read’ does exactly what the name implies–read folk for filth and throw a lot of shade. No, seriously, if tea is your drink of choice, this hilarious podcast will have you LYAO as they come for everybody and they mama (except Bey). You can listen to ‘The Read’ on iTunes.

Okay, so this podcast is cool af. The show’s hosts Aaron Bee, Fiq Blerdman, and Teddy speak on topics that range from sex dolls to comic books–givings us dopeness from a blerd perspective.  You can check out this podcast on Stitcher.

So, not only is Phoebe Robinson keeping us entertained with her bestie on ‘2 Dope Black Girls’, but she’s also the host of ‘Soo Many White Guys’, a podcast created from Phoebe’s frustration with “being the token black woman in an ocean of white dude comedians”.  Guests on the show range from the likes of Melissa Harris-Perry to Tom Hanks. Check it out at WNYC.

Are you a podcast fiend?  Tell us about your faves on Twitter.